Demolished in the late 19th century and the roads Graham Road, Graham Avenue, Elmfield Avenue and Fernlea Road were built on this land.

Described by Eric Montague in his book Mitcham Histories : 2 North Mitcham, page 74, as having extensive stabling, farmery, meadows and gardens. 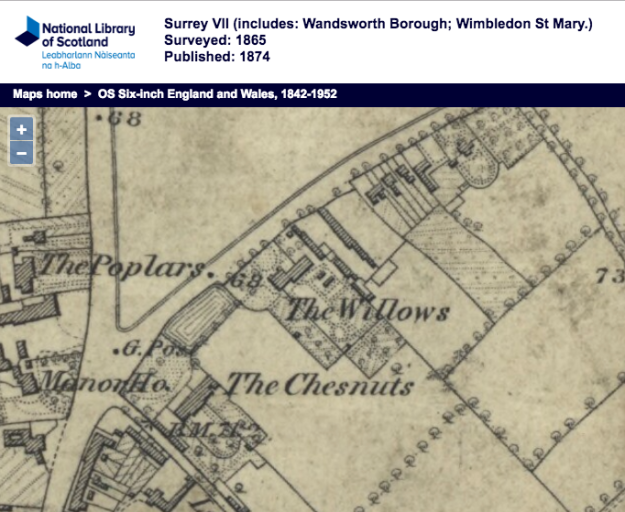 One of the developers of houses on the Willows Estate may have been Nott & Cartwright, as shown in the auction ad of 1899:

SALES BY AUCTION. THIS DAY.

In the 1900 electoral registers, owners were named of some of the lots on the Willows Estate:

From the centenary booklet of the Wandsworth and District Gas Company:

The Mitcham Company amalgamated withe the Wandsworth Gas Company in 1912.

The Kingston Gas Light and Coke Company was the outcome of a small company formed in 1835, and was reorganised in 1854. Gas was supplied to Kingston and Norbiton, and in 1862, the second trunk main was laid from the works to Surbiton. Two years later the mains were extended to Esher.

The Malden Gas Company had been formed and was supplying Malden, but in 1868 the Kingston Company purchased the Malden’s Gas Works and Mains, and extended their own mains to New Malden, Worcester Park and Old Malden. Mains were ultimately extended to Claygate, and continued extensions followed.

The Kingston Company was amalgamated with the Wandsworth Gas Company in 1930.

The Epsom and Ewell Gas Company was formed in 1839, curiously enough at an hotel at Epsom bearing the same name as that in which the Wandsworth Company was formed – the “Spread Eagle.” The early records show that while the Company was successful from the start it was concerned in a difficult problem in 1841, for it recorded that in 1841 the surveyor and engineer to the original works was indicted with a number of charges and was to be brought to trial. The allegation against him (according to an old and very lengthy legal parchment) was that he had left 5,000 leaks and left the works “insufficient, inadequate, imperfect, unskilful, and inappropriate, etc.”, causing damage to the plaintiffs amounting to £10,000.

The records also include references to the meetings of the Directors, at one of which, held at the “Spread Eagle” Inn, on the 21st July, 1853 : “no resolutions were passed on account of strangers being present.”

The Epsom and Ewell Company was amalgamated with the Wandsworth Gas Company, in 1912.

The Sutton Gas Company came into being in 1853, and was also successful from its inception for records show an early reduction in the price of gas, a determination “to supply the village with gas at as low a rate as any village of the same size as any in the country,” and (in 1863) reference to the necessity of calling the Directors frequently together to sanction various extensions as they might be required. A minute in May, 1876, indicates the prosperity of the Company for it records: “Your Directors have pleasure to inform you that their efforts for the last twelve months have been crowned with the usual success.”

The Sutton Gas Company was amalgamated with the Wandsworth Gas Company, in 1931,

Source: “The Wandsworth and District Gas Company 1834 to 1934”, available at Merton Heritage and Local Studies Centre at Morden Library.

From the National Archives:

The Wandsworth gasworks were established in 1834 on the south bank of the Thames close to the Wandsworth Bridge. The early company supplied Wandsworth, Putney and part of Battersea. The Wandsworth and Putney Gaslight and Coke Company was incorporated by AoP in 1856 following its formation by Deed of Settlement in Feb 1854. The first chairman was R.Barchard who was succeeded by James Howell and his son Thomas Howell. In 1912 the company amalgamated with the Mitcham and Wimbledon District Gaslight Company and the Epsom and Ewell Gas Company to form the Wandsworth, Wimbledon and Epsom District Gas Company. In 1931 the Kingston upon Thames Gas Company and the Sutton Gas Company were acquired and the title changed to the Wandsworth and District Gas Company. The headquarters of the company was at Fairfield Rd, Wandsworth. In 1936 the Leatherhead Gas & Lighting Company and the Walton upon Thames and Weybridge Gas Company were absorbed. The chairman between 1903 and 1925 was H.E.Jones who was followed by his son F.H.Jones. The company owned a fleet of colliers to supply coal from the NE of England. The first steam collier was acquired in 1906 – the SS “Radcliffe” which carried about 1050 tons of coal. Pontoons were also built with steam cranes to unload the colliers. The SS “Wandle” was purchased in 1909 and became the flagship of the fleet. The company purchased land at Worcester Park in Sussex in 1924 for additional gasholders. On nationalisation in 1949 the undertaking became part of the West Surrey Division of the SEGB. 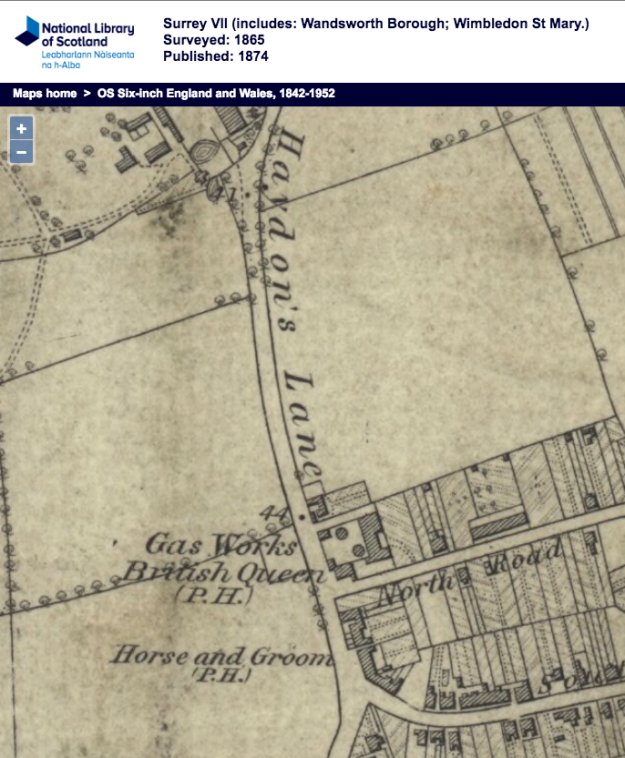