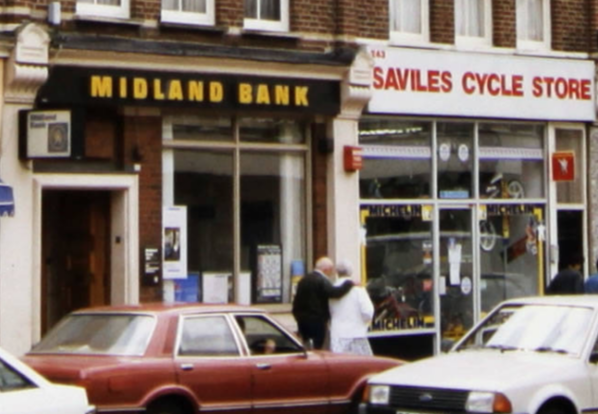 In March 2018 a halal butchers opened at this address.

Branch of Barclays Bank that was at 342-344 London Road, on the corner with Lower Green West.

According to Eric Montague, in his book Mitcham Histories: 5 Lower Green West, page 114:

Completely out of keeping with the surrounding buildings, but obviously conceived in the confident belief that eventually this corner of Mitcham would become the commercial centre of the developing town, the three-storeyed Barclays Bank building … was the first purpose-built bank in the village. It dates from the early years of the 20th century, when the houses on Bryant’s Corner were pulled down and within a few years the bank was extended along the London Road frontage

This clip from a Tom Francis photo shows the building before this expansion along the London Road. It shows that there were two windows with arches along the London Road, the main entrance on the corner, and three similar windows along Lower Green West, and another entrance.

In his notes that accompanied this photo, Tom Francis said that when Lloyds and Westminster banks opened branches in the Fair Green, Barclays was compelled to open a branch there as well. Montague said that this branch was kept until the late 1980s.