The two view (exterior and interior) which we give in our present number, illustrate a portion of the alterations and additions recently made to this residence, comprising chiefly the construction of a central hall opening to the staircase, with a stone arcade, the erection of a new wing containing a drawing-room, with guests’ rooms and boudoir over, the re-modelling and re-erection of tbe conservatory in a new position, and various alterations and additions to the kitchen and domestic offices.

Tho hall is panelled the whole height in wood-work, the decoration of the panels resembling “Tarsia” work, the ceiling being also panelled, and having moulded beams with pendants at the intersections.

The general effect of the decoration is a golden brown, the floor is of marble mosaic, and the stonework and steps, and shafts are of red Mansfield stone and Belgian “T” grey marble, the windows being filled with stained glass. Teo chimney-piece, in red Dumfries stone, deeply recessed, moulded, and carved, and having a carved and traceried hood in wainscot, running up to the ceiling cornice, with a central painting (by Weekes), forms a picturesque feature.

The lower portion of the staircase has been reconstructed, and now faces the hall, a screen, with carved and moulded shafts bearing a cusped arcade with carved spandrels, being carried across the entrance vestibule; the newels to stairs are also moulded and carved, having between them pierced and carved panels. The wall-surfaces of the staircase are decorated in tones of blue, the woodwork being black.
Tbe drawing-room is panelled to a height of about 8 ft., finished with a moulded and embattled cornice. The architraves to doorways are enriched with carved beads and moulded shafts, carrying coved heads with moulded ribs, open baluster work, cresting, and pendants.

The ceiling has a geometrical setting-out of plaster ribs with enriched pendants at the intersections, and a frieze in low relief, and the floor has a central filling of French oak, “ herringbone,” with a border of wainscot, walnut, and ebonised pear-wood.

The present scheme of colour is kept light, but low in tone, with some gold, increased richness being intended to be given later on by the painted frieze and the introduction of figure subjects,— possibly illustrative of some poem or legend,— in the panels, in colour on a gold ground.

Externally the work is executed in old brickwork, red Mansfield stone, and brown tiles, the roofs of the turrets and all the finials being of copper ; the barge-boards are moulded and carved, and all the mullions and woodwork to the windows, turrets, &c., are fully moulded.

The general contract work was carried out by Mr. Geo. Amer, builder, of Catford, and the whole of the decorative and art work generally by Messrs. Harland & Fisher, who also executed the stained glass and the marble mosaic pavement; Messrs. Strode, Turpin, and Tagnon respectively providing the gasfittings, parquet, and marble work; the whole being executed from the designs and under the superintendence of Mr. Alfred Jowers, architect, of Gray’s Inn-square, London.

House in Phipps Bridge, home to the Harland family. The varnish factory of William Harland & Sons Ltd. was just to the north, as can be seen on this 1894 map: 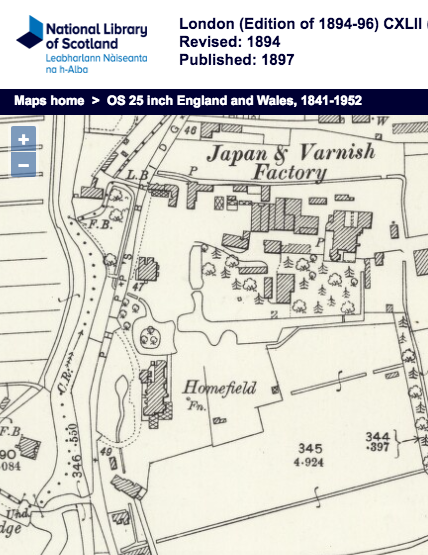 According to Eric Montague, in his book Mitcham Histories: 8 Phipps Bridge, page 12,

the present bridge, … dates to the mid-1950s and replaced a World War II ‘Bailey’ bridge

In May 2016, the bridge was closed for repairs, and a new bridge was opened in February 2017. See also report by the contractor involved in the restoration. 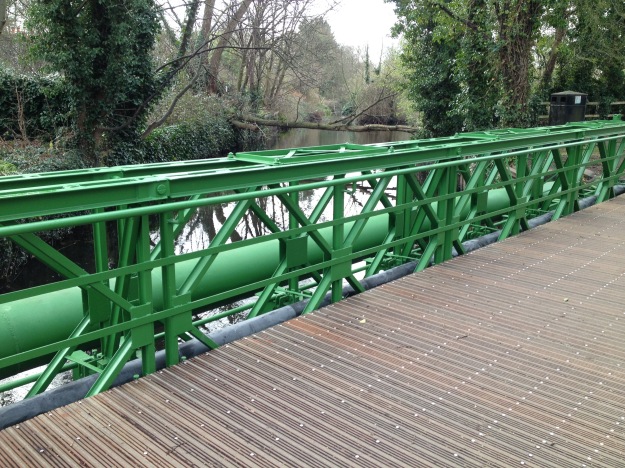 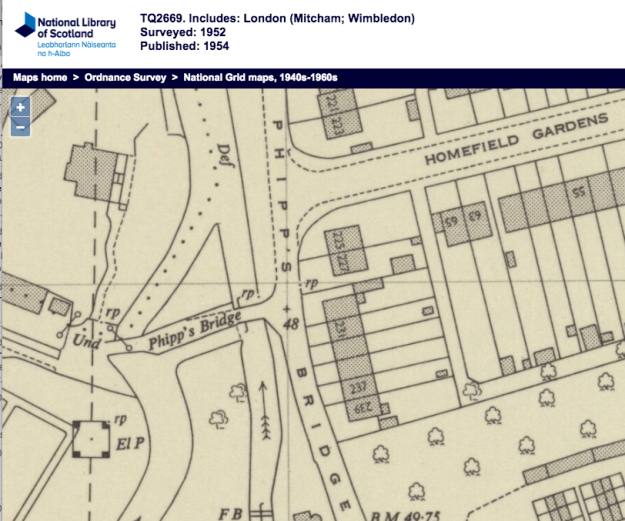