At Southwark Coroner’s Court yesterday Dr. Waldo resumed the inquiry into the death id, Charles Farrant, (46), of Ravensbury Cottages, St. Marks-road, Mitcham, who died in Guy’s Hospital December 17th. The deceased was employed by the Home and Colonial Meat Stores, and managed the shop, 1, Fair Green. Mitcham. At the previous hearing the Coroner said that the deceased was believed have contracted anthrax. He had been handling frozen rabbits from New Zealand. He complained of headache on December 12th and a little pimple appeared on the left side of the neck.He was taken to the hospital and an operation was performed. Dr. Waldo, taking his seat at the resumed hearing, said that whenever he had an adjourned an inquiry he always got a number of letters, anonymous and otherwise. He been in communication with Dr. Jackson, the Croydon Coroner, who himself had received an letter with regard to the death of a man named Penn of Frith-road, Croydon. If it had not been for that letter Dr. Jackson would have known nothing of Penn’s death, which the writer of the letter alleged was due to anthrax. Dr. Jackson further said that the doctors at the hospital where Perm was treated did not think it was a case in which they should advise the coroner. Dr. Jackson, however, made inquiries, and found that Penn had been buried three days after death, so no inquest took place. He (Dr. Waldo) had received an anonymous letter in regard to the present case. The writer said he could throw light on the matter, but did not come forward. Walter Curtis Martin, butcher, said that he managed his father’s shop at the Fair Green, Mitcham. He sometimes bought rabbits in London and sometimes in Croydon. The rabbits came from Australia and New Zealand. On December 7th he bought some beef in Church-street, Croydon, and some from London. When witness was visiting the deceased he heard that there was a man named Penn suffering from anthrax in the Croydon Hospital, and witness became apprehensive. Witness had a pimple on his neck something like Farrant’s. He was operated upon.

Witness: No, not in any way; I have noticed nothing wrong, and we havec had no complaints of any kind. Dr. Legge, H.M. chief medical-inspector of factories and workshops, said that anthrax was not a disease compulsory notifiable, but two years ago the Local Government Board issued a memorandum recommending local authorities to add anthrax to the diseases which were compulsorily notifiable. It was most useful that such cases should be investigated. It would be good thing all cases of death from anthrax were reported.

The Coroner : All cases at Guy’s are notified but it does not seem to have been done in the case of Penn. Dr. Legge said that death was due to anthrax, which frequently passed unrecognised. It might never known that, an anthrax infected carcase had been disposed of, and a person consuming the flesh of anthrax infected meat did not necessarily die, or suffer. The germ was killed by the cooking of the meat. Cases of intestinal anthrax from consumption of infected meat were rare.

Mr. Marsden (who appeared for Mr. Martin): Can a man give it to an animal as well as the other way about?

Witness: He could infect the meat, but should say it was a negligible probability. Dr. Robert Clarke, Medical Officer of Health for Croydon, Said that he could not trace Penn’s death; nor could say how Farrant became infected.

The Coroner: Are there not cases where men have got it from infected corn or oats?

Shown opposite Eagle House in this map of 1865: 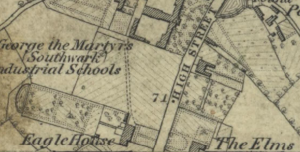 Montague’s ‘Mitcham Histories: 7 The Upper, or Fair Green, Mitcham’, page 110, says the The Elms was destroyed by fire in December 1896. Merton Memories website says that this house, owned by Peter Waldo, was demolished and ownership passed to the Waldo-Sibthorp part of the family.

Montague says that the land was given by the Reverend Humphrey Waldo Sibthorp for the purpose of building a Sunday school.