New road with housing off east side of Tamworth Park, north of Commonside East and south of Tamworth Lane. The road is parallel to Tamworth Park. There are 33 properties in this road, numbered consecutively from 1 to 33, all with the postcode CR4 1JQ.

aerial view looking towards the east

Possibly built in 1988 or 1989. Planning permission 88/P1199 was applied for in 1988 for Numbers 54/56 and land and premises rear of numbers 2-52, Tamworth Park, Mitcham
for the redevelopment of site by the erection of 6 x three bedroom houses 6 x three bedroom flats 12 x two bedroom flats and 19 x one bedroom flats together with associated parking and landscaping. This application was refused and an appeal was lodged, with that being refused as well. The LB Merton planning website doesn’t however show the application that was allowed for the current development, which is of 4 blocks, 2 of flats, and 2 terraces of houses.

The Tithe Apportionment Map of 1846 shows that this field was part of the land owned by John Watney.

The 1938 OS map shows a cluster of buildings at the north end of this field.

The 1953 OS map helps to identify these buildings: 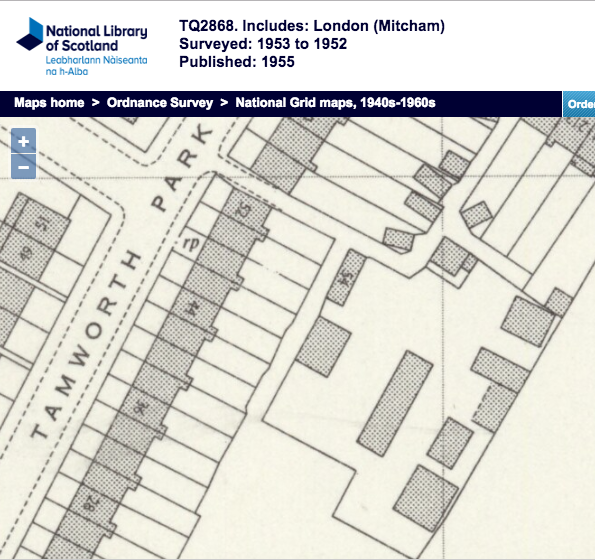 Other occupants of 54 Tamworth Park included the company Hyrax Lubricants Ltd., which applied for a trademark in 1940 for its product “Hyrax-Petrecon”.

Planning application MIT1836, dated 21st December, 1955, has a B.S. Bartlett of 54 Tamworth Park being permitted use of part of 54 Tamworth Park for a garage and motor repair business. It is believed that this property continued to be used for car repairs until the mid 1980s (from a comment on the Facebook Mitcham History Group).

Road that runs between Commonside East, about a fifth of a mile east of the Beehive Bridge, and Tamworth Lane.

The three fields shown in this 1866 OS map, between The Cedars and Tamworth Lodge, is likely to be the plot referred to in the 1873 sale below.

This building plot of about 9 acres was advertised for sale in an ad in 1873 where it was described that 40 feet of the road had already been laid out.

— Tamworth-park Estate, about nine acres of valuable Freehold Building Land, immediately fronting Mitcham-common (an open space of 600 to 700 acres extent, which can never be built upon or enclosed). on the high road to Croydon, within 15 minutes’ walk of the Mitcham Junction Station on the South London, Peckham, and Sutton branch of the London, Brighton, and South Coast Railway, whence 43 trains run daily to London-bridge, Victoria. and Waterloo Stations, and within tbo same distance of the Beddington and the Mitcham Stations on the Croydon and Wimbledon line of the London and South-Western Railway. A 40 foot road with footways and sower have been made across the property, so that it is fit for immediate building operations. It contains gravel in abundance, is adorned with handsome elm and other ornamental trees, and is admirably adapted for those seeking sites for superior villa residences in a healthy and highly favoured locality, which can never be over built. Immediate possession on completion of the purchase.

MESSRS. DRIVER have received instructions to SELL by AUCTION, at the MART, Tokenhouse-yard, on TUESDAY. the 1st of July, at Two o’clock precisely, the above valuable BUILDING PROPERTY, in six lots.—Particulars shortly of C. B. Hallward, Esq., solicitor, 5. Mitre-court, Temple; and of Messrs. Driver, Surveyors, Land Agents, and Auctioneers. 4, Whitehall, London, S. W.

This 1894 OS map shows that the road had been started from the Commonside East end, the remaining part being a track to Tamworth Lane. The dotted red lines mark an area that, when measured on a geo-referenced map, measures out an area of around 9 acres. 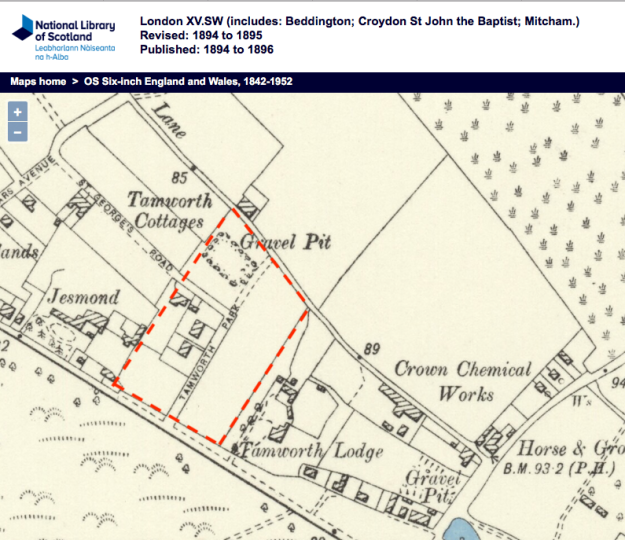 On this map there are two houses, and these are listed by name in the 1898 street directory:

This 1910 OS map shows the houses that were built on the right hand side of the road at the Commonside East end. The 1910-1911 street directory lists the houses from Commonside East and on the left, or north-west side are the named houses Elmhurst and Tamworth, and on the right, or south-east side, there are 26 houses numbered sequentially from 1.

Tamworth park, from Coomon side east.

In the 1925 street directory the houses have been renumbvered even from 2 to 52.

Tamworth park, from Common side east.

the northern end of the road was constructed in the late 1920s by the Tamworth Park Construction Company owned by Joseph Owen. Numbers 25 – 51, on the south-western side of the road, like the houses numbered 263 – 273 Commonside East, are in the contrasting art deco style of the 1930s, which owed much to the inspiration of Continental architects, and was perhaps more suited to the south of France. White cement-rendered walls, bright green-glazed pan-tiled roofs, and large metal-framed windows set them apart from the more traditional architecture of the Home Counties.

The 1927 electoral registers shows even numbered houses from 2 to 74, and the addition of odd houses numbered 53 to 75.

clip from September 1929 photo of south east side of Tamworth Park, no.s 2 to 52. From Mertom Memories, photo reference Mit_Streets_P_Wil_68-1

This 1955 OS map shows number 54 away from the road, behind number 52. I am assuming that this was the site office and yard for the building company, Tamworth Park Construction. Later there were car repair workshops and lock-ups. This was redeveloped as Worthington Close, in around 1988/9. 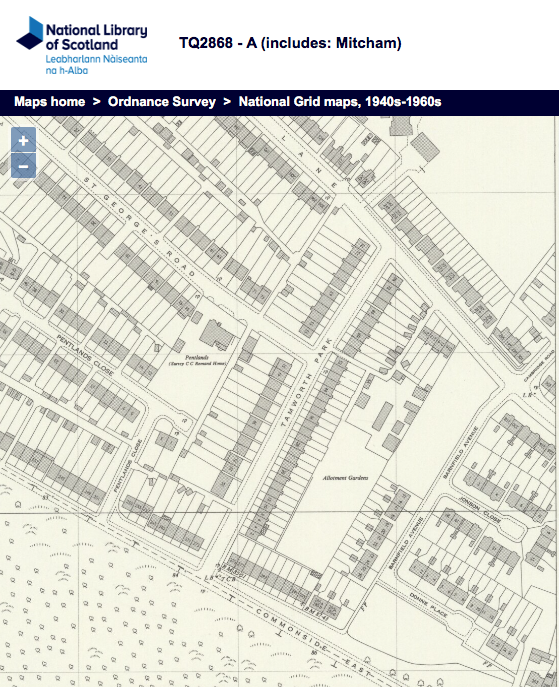 From the Mitcham Golf Club archives:

Note that no. 25 was renumbered to 50, see directories above.

In the Norwood News – Tuesday 9th September 1924, the Childrens Circle, conducted by “DADDY”, published correspondence by Ida Hearn from no. 25.

Daddy gives two lovely books as prizes every week for the best poetry sent in. The prizes this week go to:—

— I have been very interested in the Children’s Circle. and I thought I should like to become one of your members. I am sending you In a piece of poetry, a riddle, and a joke, which I hope you will see fit to publish, I attend Upper Mitcham Girls’ School. Wishing the Circle the best of luck, Your loving daughter, IDA HEARN. 25, Tamworth-park, Mitcham, Surrey.

THE GIRL WORTH WHILE

‘Tis easy enough to be pleasant,
When life flows along like a song,
But the girl worth while is the girl who will smile,
When everything goes dead wrong,
For the test of the heart is trouble,
And it always comes with the years,
And the smile that is worth the promise of earth
Is the smile that comes through tears.