The road called Lavender Grove, off of Lavender Avenue and parallel with Mortimer Road, was built in the 1930s. Possibly named from a group of nearby cottages that were situated near what is now the junction of Steers Mead. 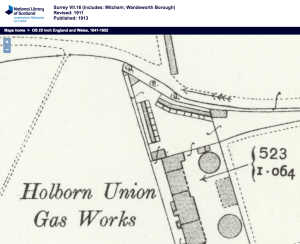 Lavender Grove in the ‘west fields’, was referred to in a newspaper story about a fire in 1889. The actual location is uncertain, but the article refers to the water supply for the fire brigade to be too far away in Merton Lane (later Western Road).

The Volunteer Fire Brigade received call on Monday night 11.50 to a fire at Westfields. The men were mustered and the steamer taken to the spot in a very few minutes, when it was found that two cottages in the occupation of Mr. Simmons, jun., florist, namely, 3 and 4, Rosemary-cottages, Lavender-grove, and used by him for the storage of herbs, were well alight.

The nearest fire plug being over 400 yards distant in Merton-lane, the brigade had not sufficient hose to reach the burning cottages, and a mounted patrol was dispatched for the Merton Brigade, which arrived shortly afterwards.

By this time, however, the fire had obtained a good hold, the efforts of the firemen were directed principally to the surrounding property. By about 3 a.m. the flames were extinguished, the result being that the two cottages were gutted the contents destroyed.

It is understood that the property is fully insured in the Phoenix Office. The cause of the fire is unknown.

An 1865 birth certificate has Lavender Grove as the address of Louis James Block.