Road named possibly after the Robinson Crusoe story. Crusoe Dairy Farm was named by its owner on the possible residence of nearby Tooting Hall by Daniel Defoe, author of Robinson Crusoe. 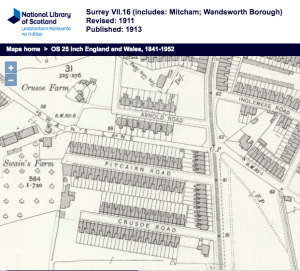 In 1921 number 52 was damaged by fire. Minutes of the Urban District Council show that the tenant was Mr F. HAWTHORN, and the landlord was Osmasten Ltd of Barnes.