A house on Cricket Green, when it was previously called Lower Green East. Demolished.

It was possibly next to White House, Cricket Green. It may have been owned by Walter Charles Rhoades. In the 1915 electoral register he is listed as living at 183 Bedford Hill, Balham, and owning “Two cottages east side of Lower green”.

The 1953 OS map shows ‘White House’ and the entrance to The Birches is just north of it.

The 1910 OS Map shows a building next to White House which may have been Rhodes Cottage. 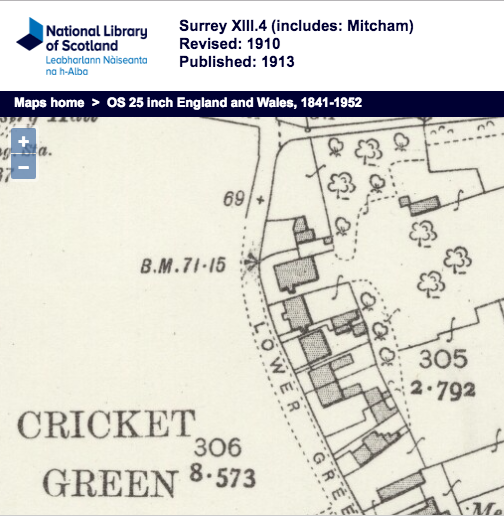 This clip from a 1910 photo on Merton Memories shows a building to the left of White House, which may have been Rhodes Cottage.

Electoral registers show this as Rhoades or Rheades Cottage.

Nuisances: “Rhodes Cottage” and “White House” Lower Green.
Inspector Rabbetts reported the existence of nuisances at these premises, arising from the defective condition of the drains. Resolved, That the Inspector of Nuisances be authorised to serve notice on the owner, Mr. A. R. Harwood, of London Road, Mitcham, requiring the abatement of said nuisances.