Built in 1864, this was the residence of the civil engineer George Parker Bidder until 1877, when he transferred it to his son George Parker Bidder II. The son, who as a QC helped secure the future of Mitcham Common, died in 1896. His Ravensbury estate was broken up and, after being sold in 1899, see sale notice below, Ravensbury Park House became the Catherine Gladstone Convalescent Home founded by the wife of the prime minister, William Gladstone. 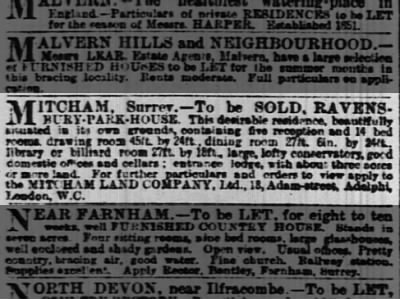 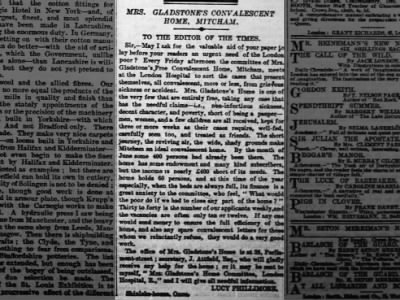 The Queen has graciously consented to be the Patroness of Mrs. Gladstone’s Free Convalescent Home for the Poor of London, now situated at Ravensbury House, Mitcham. Founded in 1866 by Mrs Gladstone, this charity has received 35,617 patients, men, women, and children. It is mainly dependent on voluntary contributions for its support.