Terrace of houses at end of Nursery Road. Demolished as part of a slum clearance scheme, that was announced in 1962. The actual date of demolition is not known. As is pointed out in a comment below, there are still entries in the 1965 electoral register for Prussia Place. 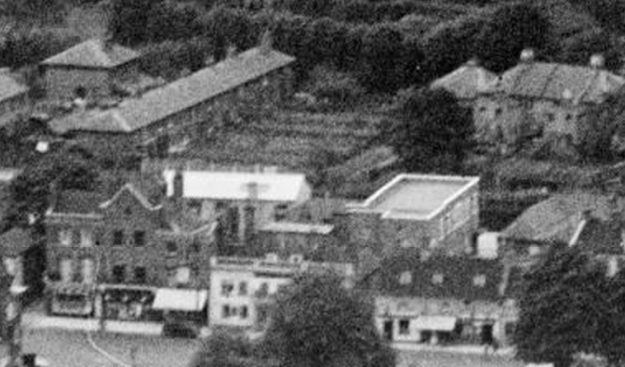 1937 Aerial photo – Prussia Place is the row of houses top left, with long gardens to the right

In the Nursery Cottages:

Freeholds, Mitcham, Surrey, with Votes for the County.
– By Mr. BURRELL, at Garraway’s, on Tuesday, 23d instant, at twelve, in twelve Lots.

A valuable freehold estate, called Prussia-Place, situate at the back of the School of Industry, at Lower Mitcham; comprising a row of 12 neat substantial brick houses, containing four rooms each, with gardens in the front and back, now in the several occupations of Messrs. Franklin, Kitchen, Buckle, Hayward, Croucher, Foster, Savage, Dalton, Hughes, Willett, Mitcheson, and Hodges, at rents amounting to £120 per annum.

– May be viewed ten days preceding the sale, when particulars may be had at the Buck’s Head, Mitcham; the King’s Head and White Hart Inns, Lower Mitcham; at Garraway’s; and of Mr. Burrell, Throgmorton-street.

4 and 5, PRUSSIA PLACE, MITCHAM, two freehold cottages, a turning off Nurseryroad, in the rear of the old Mitcham National Schools, let at 5s. per week each to good tenants. These properties are situate in excellent sites for letting, and form sound small investments. _ _ _ Particulars and conditions of sale may be obtained of Messrs. Potter and Crandwell, Solicitors, South-street, Farnham ; at the place of sale ; and of the Auctioneers, 4, Highstreet, Croydon. Telephone, 122 Croydon.

Edward the Somnolent.
Mitcham Man Whose Fondness for Bed Got Him into Trouble.
TOO MUCH “REST CURE.”

While it might, perhaps, be unfair to compare Edward A. Parker, a middle-aged man, of 6, Prussia-place, Lower Mitcham, with the allegorical dog of Ludlam, which was so lazy that it leaned its head against the wall to bark, he, according to the story of his “better half,” has of late years grown tired and has been indulging in a “rest cure.” Such a fondness for bed has he developed that his wife alleged that he has neglected to maintain her, and she was, in consequence, an applicant to the magistrates at Croydon for a separation and maintenance order.

GIRL AND SOLDIER.
What Happened on a Holiday.
ORDER AGAINST A CANADIAN.

Before the Croydon County Bench of magistrates on Saturday Harry White, of the 10th Reserve Batt. Canadian Army Service Corps, was summoned by Bertha Annie Hobbs, of Prussia-place, Nursery-road, Mitcham, in respect to her male child born in May.

Mr. Cubison appeared for the complainant, who stated that her knowledge of defendant dated from August 20th, 1915, on which day she went to Hawkhurst, in Kent, for her holidays, to stay with a cousin. On the following day she went out and met defendant, and walked with him. The next day —a Sunday–she again met defendant and went for a walk with him. On Monday defendant asked her to keep company with him, and said that he was comfortably off, having a farm in Canada. She agreed to keep company with him; and intimacy took place. On returning to her cousin’s hone, defendant was invited in to tea, and in the evening she again went, out with him. On Tuesday witness was to return home, and before going she saw him in the afternoon and intimacy again took place. Defendant gave her a box of fruit, and she gave him a photograph of herself.

Eventually, defendant came to meet her at Epsom, and intimacy once more occurred. Defendant asked her to marry him either then or after the war, but she neither said yes nor no; she did not reject him, however.

Letters from defendant to applicant. couched in very affectionate terms, were read. Most of them concluded “Believe me, your sincere and affectionate sweetheart.”

Defendant alleged that complainant went out at Hawkhurst with a “red-headed boy,” a driver. This soldier had told him that he had had intimate relations with complainant.

Answering defendant, complainant admitted that she went out one evening with the young man referred to. She denied receiving a sum of £1 from defendant after she had written and told him of her condition.

Defendant declared that he told complainant that he was a married man with two children. Even had he been single he would certainly not have asked a girl to marry him on the strength of a few days’ acquaintanceship. He did not tell her he had a farm in Canada : he was a miner.

Asked how much he earned at mining before he joined the Army, defendant that on an average he got 12s. 6d. a day. At present his money in the Canadian Army was 20 cents a day.

He was partly disabled now, and was at a convalescent hospital. He was ordered to pay 5s. a week until the child reached the age of fourteen years and expenses amounting to £2.

Given away by Mr. William Groombridge, the bride was attired in a white silk taffeta gown with a head-dress of orange blossom and white silk net veil, and carried a bouquet of carnations. She was attended by the Misses Phyllis, Mary and Betty Cowling (sisters of the bridegroom), Miss Beryl Groombridge (niece of the bride), and the Misses Joan Sullivan and Joyce Miles (cousins of the bride). Of the two senior bridesmaids one was in pink and the other in blue, with headdresses of crepe silver and veils, and they carried bouquets of carnations. Two of the younger bridesmaids wore pink, and the other two were in blue, with headdresses of silver leaves and muffs to match.

The Rev. G. S. Lubbock conducted the service and Mr. J. Cowling was best man. The hymns were “Lead Us, Heavenly Father.” and “Love Divine,” and among the special music was a wedding march. A reception was held at the Bull Hotel, Mitcham.

The late Dr. Heathcote’s Wines, Mitcham-common. – By Mr, HOGGART, at the Buck’s Head, Mitcham, on Wednesday, Dec. 13, at 12, by order of the Executors.

The Cellar of fine Wines of the Rev. Dr. Heathcote deceased, lying in the cellar of his late residence, upon Mitcham-common, from whence they will be permitted to the purchasers; they consist of about 130 dozens of port, 6 and 3 years in bottle, and about 26 dozens of old Madeira, claret, hermitage, &c. To be tasted the morning of sale; and catalogues had at the Buck’s Head, Mitcham; and of Mr. Hoggart, 62, Old Broad-street.