A terrace of 12 houses, built in 1907, on Commonside East, numbered 299 to 321. This part of the road is set back from the main road at its western end, and runs to Manor Road at its eastern end.

Tamworth Villas from the air

The facades of these houses have, near the roof, three small square bricks with the patterns English rose, circles, English rose. In addition there are two different friezes above and centred between each house. One of the friezes is of a man, possibly Bacchus as there is a keystone brick above the head with a bunch of grapes; the other is a woman, above whose head is a keystone of a flower.

Between each house there is the frieze of the man’s face.

However, when looking at the first house, number 299, the frieze with the man’s face is on the left, and a grapes keystone is left of the frieze near the edge of the wall (this bunch of grapes differs from the others in that it is angled to the right). At the other end of the terrace, at number 321, there is no extra frieze, and the keystone near the right hand edge is of a sunflower. Is no. 299 wider than no. 321?

There is an alleyway in the middle of the terrace, between numbers 309 and 311, which gives access to the back gardens. The alleyway has an arch which is formed of eleven segmental bricks, five on either side of the keystone brick. A pattern is repeated on each side consisting of two segments with a sunflower, one with grapes and two sunflowers again. The grapes and sunflower are repeated with the friezes, as described above. The keystone of the arch has a three petal flower.

Above the arch is a datestone showing the year 1907.

Above the datestone is a frieze of a sculpted face, and above that is another of the brick segment of grapes that is used in the arch.

This frieze, and the grapes segment above it, is repeated between alternate houses on either side of the alleyway. Between the other houses is a frieze with the sculpted face of a woman, and above that is a smaller face. 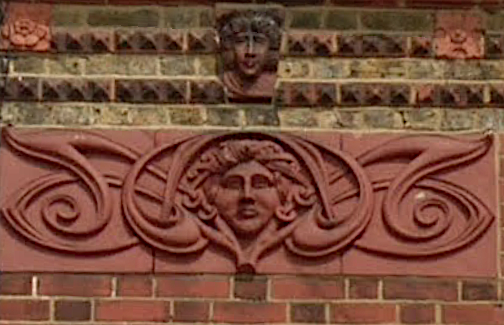 1910 OS map showing the terrace to the south east of Tamworth Lodge.

The terrace was originally numbered sequentially, from 1 at the western end to 12 at the eastern end. The road was possibly renumbered after 1925, and the equivalent numbers are shown below.

Waterloo Place was a row of 3 houses on the west side of London Road, near to where Dennis Reeve Close is now.

The 1912 street directory lists the properties from north to south:

The OS map of 1911 shows a single house on the south side of Crusoe Road at the corner of London Road, and this may have been Carlingford. Then there are no buildings until Tamworth Farm, in occupation by F & G Mizen. Then there are two separate buildings, presumed to be John Elmer and Mrs Ruth Parrish. 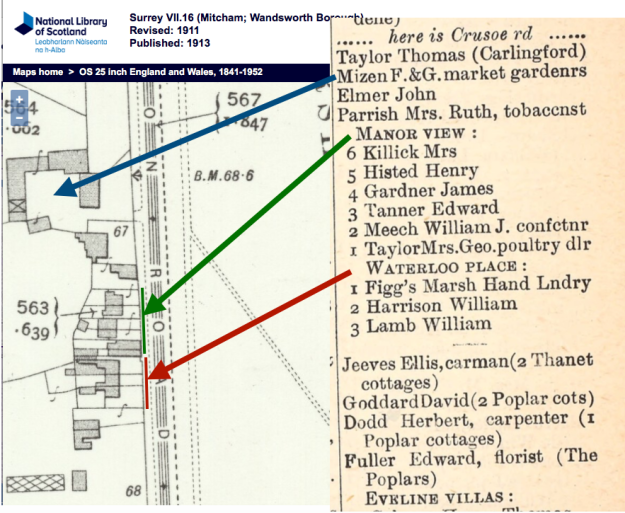